To restore the HEART of the community to protect youth

Stephanie Mann founded Safe Kids Now http://www.safekidsnow.com in an effort to educate neigborhoods how as a community we can work together to not only keep our neighborhoods safe, but also to keep our children safe and protected.  Remember Neighborhood Watch and how successful that program was?  Well Stephanie’s idea is in tune with the same idea and is working very hard at taking Kids Safe Now nationwide.

Be Cause PR Teams Up With a Passionate One Woman Show

Cathy met Stephanie on Facebook in 2011 and thought yet again, why can’t Stephanie get someone to help her with PR? Cathy reached out to Stephanie and currently acts as her PR advisor on a pro bono basis.  She has helped Stephanie think of other ways to reach out to her current and different audiences.  She advised Stephanie about starting a social media campaign, teaming up with influential partners, getting more vocal with public appearances and speaking opportunities on television and the radio. Cathy writes press releases for Stephanie to send out on a proactive basis to educate as well to inform people about her program after such tragedies such as Sandy Hook.  She covers everything from child neglect, bullying, gun control, education, hunger, etc.  If you study Stephanie’s website you will see that she has become quite a podcaster, how she continues to team up with amazing partners and a board of directors, and has respect and support from high ranking officials.  But this can’t be a ONE WOMAN show.  Be Cause PR’s goal in helping Safe Kids Now is to get Stephanie exposure around the country with leading publications and influencers as well as to help her raise funds so she can have a communications and volunteer program in place.  Keeping neighborhoods safe for our children should be a turn-key solution.

Most of our crime problems were committed byWithin 2+ years, our residents worked together and decreased crime 48%.

Shirley Henke and I co-authored, “Alternative to Fear: Guidelines to Safer Neighborhoods.” It was published in 1975 with the help of California’s first lady, Nancy Reagan and the California Youth Authority.  Thousands of copies were sold to police departments, police training centers, state and government agencies around the country, including the FBI. The book helped popularize “Neighborhood Watch” Program.

The two programs Be Cause PR is helping Stephanie drive are the Adopt A Block Guidebook and Street Safe Kids Guidebook.

The Adopt-A-Block Guidebook: 10 Steps to a Safe and Healthy Neighborhood

This program offers a simple plan for making any community a better place to live. In ten, easy-to-follow steps, the guidebook explains how a group of neighbors, members of a civic, service or religious organization, or local governments can “adopt” a one-block area and create safety zones throughout the community.

Street Safe Kids is a guidebook for preteens, teens and adults. The guidebook (142 pages) contains 138 discussion topics which include:

STEP 1. RECOGNIZE HOW SPECIAL YOU ARE

STEP 5. TRUST YOUR INTUITION AND INSTINCTS

STEP 6. TAKE CHARGE OF YOUR LIFE

STEP 8. MAKE CONNECTIONS WITH OTHERS

“Stephanie . . . You remain for me one of the most impressive citizen activists I’ve ever met.”

“A major aid to parents as they work to help their children avoid drugs, gangs, violence, and juvenile crime.”

If I’d been introduced to a program like ‘Street Safe Kids’ when I was younger, I am confident that I would not have made the self-destructive decisions, which led to multiple arrests, before I reached adult age.”

“Street Safe Kids will make a significant contribution toward the prevention of youth violence.”

I have used the “Street Safe Kids” manual and it works.  It is a peer to peer book which can be used for families of all ages.”

“Street Safe Kids helps young people discover the power of their own consciences.” 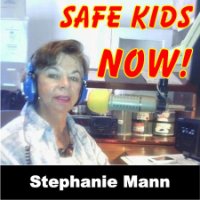 • “The Adopt-A-Block Guidebook: 10 steps to a safe and

BCPR provides business strategy and communications for thought leaders, socially conscious businesses, Causes, and public figures who believe that they can make a difference in the world.