YOU ARE ENOUGH Billboard Campaign 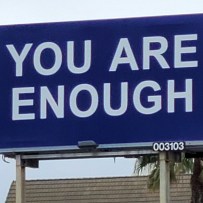 The YOU ARE ENOUGH billboard campaign is something I came up with one morning while I was dealing with depression and anxiety, feelings that I have had to fight with for most of my life.   That morning as I was feeling so hopeless  I thought to myself how no one should have to go through the darkness and loneliness that I was feeling. I wanted to find a way to give folks who were dealing with mental health challenges a way to feel seen and loved. So why not put a billboard up in my neighborhood with the words YOU ARE ENOUGH on it?!

Lu Parker, a news anchor from KTLA, shared my story all across her social media outlets because she saw the importance of the campaign and how we all are enough.

With depression being the number one disability in our country and with mental illness being something that is still taboo to a lot of people, I wanted to find a way to start a campaign that would bring us all together around feeling ENOUGH in our lives. Today we live in a scarcity society where we are bombarded by at least 30,000 messages a day coming at us telling us that we need to do more, be more, buy more, and have more to be enough. Many of us feel as though we are on a hamster wheel trying to do what we think we need to do to be enough to only feel depressed and anxious because we do not feel that we are ever going to do enough to feel enough.

Over the past year while working on the campaign I  interviewed friends and strangers and asked them to share their thoughts on what being enough means to them. I started a Facebook page a podcast, bought wristbands that simply say, YOU ARE ENOUGH on them, and have been handing them out like hotcakes and have merchandise available such as yard signs, sweatshirts, t-shirts, and car decals.  Then when we were hit by Covid-19 I knew it was time to get a billboard up. People were losing a sense of hope and many felt lost and lacking a sense of purpose.  Our mental health situation in our country is fast becoming the new pandemic and I was sure that getting these billboards up would bring people some peace and hope.  The first billboard went up in Redondo Beach, CA on July 1 and since then I have gotten up three more boards in Redondo Beach.  I am running the donation-based campaign off of GoFundMe and am in the process of raising funds for billboard number five which I am hoping I can place in Compton.

ONE BILLBOARD UP AT A TIME IN THE UNITED STATES

My goal is to raise billboards throughout the United States. Since this campaign is donation-based it is even more about empathy, paying it forward, and building community and support systems.  When you think about it, we are all mirrors for one another, and all struggle with feeling enough.    So if you donate to the YOU ARE ENOUGH campaign, you are showing others that there are people out there who care for the well-being of others.   Now, more than ever, we need to feel as though we are not alone and that someone has our back.   This is what I love about the words YOU ARE ENOUGH.  They can mean so many things to individuals in a supportive and loving way.  One thing is clear, we are all equal when it comes time to feeling enough.

While working on this campaign I am evolving personally and professionally. I, like so many, am always searching for purpose and feeling ENOUGH and believe that while working on this campaign I am taking a passion, a cause, and getting it out there in order to make a social impact. Many people have come up to me and explained how the billboards have helped them feel into their worthiness and know that they are not alone.  At a time where we are dealing with the Covid-19 pandemic, Black Lives Matter, the MeToo movement, and a government that has its hands full with bringing our country together, we need to be and feel as though we are all important and vital.   I hope that we can continue to get these billboards up throughout the country so that we can be reminded of just how awesome we all are and that each and every one of us is needed.

Check out what Isaac has to say about the concept of the campaign.   Isaac was the first person I talked to about the campaign and we both agreed that this campaign is more than about a billboard and that it is about building communities and a support system.

Natalie shares how this campaign helped her feel into her ENOUGHNESS.