Home » Cathy's Thoughts » Paying It Forward Over A Cup Of Coffee

Paying It Forward Over A Cup Of Coffee 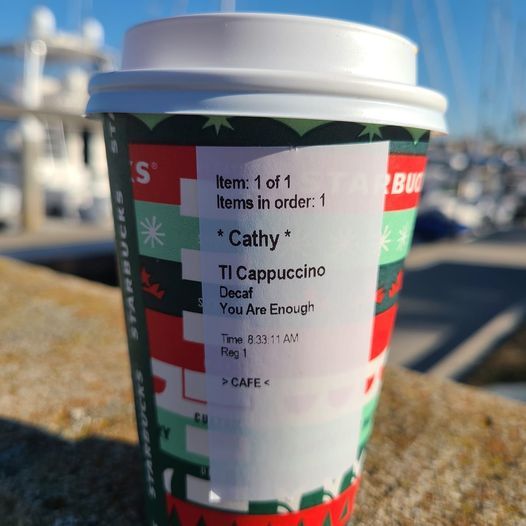 While running the YOU ARE ENOUGH campaign I continue to be touched by the stories that people are sharing about how they understand the need to help others feel into their ENOUGHNESS. This morning while getting coffee at a Starbucks near the campaign billboard in Redondo Beach a young barista explained how he took his breaks by the billboard in order to heal and feel support while he struggles with depression and isolation. He had no idea I was the one who started the billboard campaign. I was so touched as he shared his story. When it was time to get my coffee he told me to make sure that my name was correct. He had a sweet smile and hope in his eyes. His act today was about kindness, empathy, and support. What a gift I received in more ways than one. This is what this campaign is all about. It is a pay it forward movement that is helping people heal with hope and a belief that they can help others. The next billboard is slated to be launched in San Jose on November 28th on Bascom and Curtner! We are in the process of raising funds, hope, and support all at the same time. Feel free to join us! You can check out the GoFundMe campaign here –https://lnkd.in/gwPppAS